Top 10 Most Haunted Places in Taiwan

Top 10 Most Haunted Places in Taiwan

Taiwan has many haunted places and the local residents are incredibly superstitious. Taiwanese will burn juss paper and offer food and beverages to the spirits they believe live at their house. This occurs during the full moon and it is common to see Taiwanese burning incense outside when you walk around.

Located in the ancient city of Tainan, the Xinglin Hospital is considered the most haunted location in Taiwan. The hospital opened in 1975 during the Taiwan Economic Miracle and at the time was the largest hospital in Tainan. Officially, the hospital was shut down in 1993 over a dispute concerning public labor insurance, but there were also multiple scandals involving fraudulent records, medical malpractice, and allegations of wrongful death.

Visitors can find abandoned operating beds, medical equipment, pharmaceutical supplies, and personal effects. There are rumors that the spirits of the patients that died here still roam the hallways. Local residents have reported hearing sounds of crying coming from the hospital and some have reported seeing a long-haired woman sweeping the hallways.

The Minxiong Haunted House is one of the most well-known haunted locations in Taiwan. Located in the countryside near the city of Minxiong, the three-story mansion was built in 1929 for the family of the wealthy landowner and merchant Liu Rong-yu. Abandoned sometime during the 1950s, the mansion has been absorbed by the surrounding Banyan trees, with their roots sprawling across the old brick house. The Minxiong Haunted House has become one of the more popular destinations for young Taiwanese to visit and enterprising local residents have opened the “Haunted Café” next door.

There are numerous legends and supernatural events surrounding the abandoned mansion. When the Liu family still resided at the mansion, it was rumored that Liu Rong-yu fell in love with one of his servants. When his wife found out, she began tormenting the young servant whenever possible. Eventually, the torment became so unbearable that she threw herself down the residence’s well in the garden. Since then, the residence has experienced other eerie events. After retreating to the island of Taiwan during the Chinese Civil War, some Kuomintang (KMT) soldiers staying at the Minxiong mansion began committing suicide one-by-one.

The Keelung Haunted House is considered the most expensive haunted location in Taiwan due to its location in the affluent port city of Keelung. The Baroque style house was built by the wealthy Lin family in the 1930s who made their money in the mining industry. In the 1950s, part of the home was turned into a bar that catered to American forces based in Taiwan or entering the port on leave. The house has been boarded up, preventing visitors from exploring inside, but a corner on the first floor has a small shop.

A young woman working at the recently converted bar became pregnant by an American soldier. She wanted to go back to America with the soldier to raise the child, but he refused and even taunted the young pregnant woman. In an act of revenge, on the soldiers last night stationed in Taiwan, the young woman set the bar on fire. The blaze injured and killed many people, including the young pregnant woman and the American soldier. Since the fire, many residents have reported seeing a bar girl’s burnt face in the windows of the house and odd lights at night. 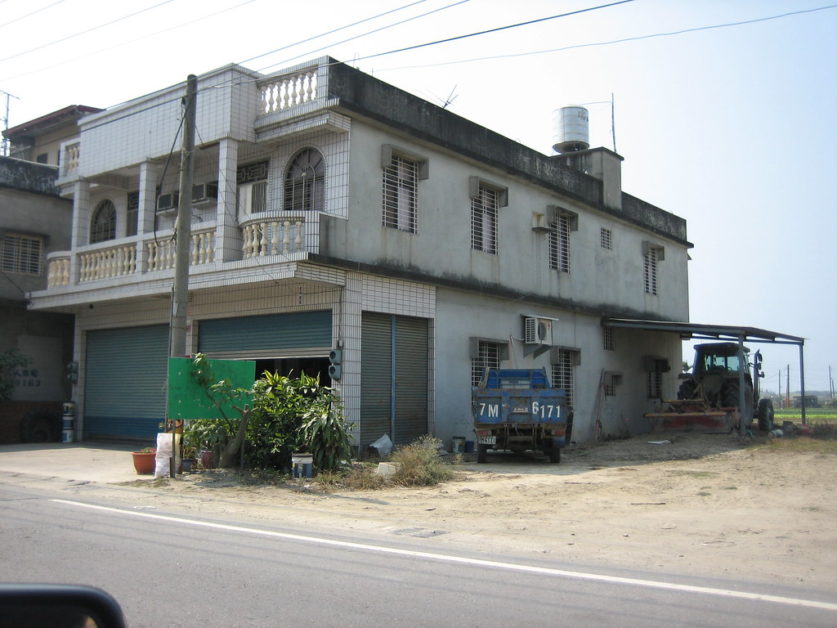 In 2006, a terrible murder took place in a house located in Hualien County. Five children from the same family were found dead in the bathroom of their house. The hands and legs were bound together with wire, their mouths and noses sealed with duct tape, and their heads were covered with plastic bags. Their parents were found dead on remote mountaintop nearby. Police suspect that the parents strangled their children and then committed suicide out of despair. The cause of the parent’s death and the motive behind the murders still remains a mystery.

Nobody was willing to live in the house for several years after the crime until a young couple decided to rent the house. They canceled their lease after only a few weeks. One of the residents reported hearing a voice of a little boy telling him that, “this was his room.” After the murders, neighbors reported seeing the youngest daughter opening the door to the house.

The Dakeng Scenic Area is located on the outskirts of Taichung City. The area is a popular place for hikers and has a network of trails. Residents looking to escape the chaotic city, head out to the lush hills and mountains to experience the forest and tropical orchards.

In 1998, a family was hiking in the Dakeng Scenic Area with a camcorder. Their video footage showed the family happily hiking together, but unnoticed by the family was a creepy little girl dressed in red following them in the background. Not soon after the family got back home, one of the sons in the video passed away. The video of the little girl in red was aired on Taiwanese TV and later inspired the Taiwanese horror movie, “The Tag-Along.”

Chen Shaozong, a wealthy businessman, built the mansion in 1920. Often referred to as “the abandoned poet’s residence,” the home was used to foster the development of the arts and was the rumored residence of the famous poet Chen Ruoshi. Located in an industrial part of Taichung, the mansion stands out due to its Japanese inspired Baroque style architecture with Greek columns, Roman arches, and red brick concrete floors. The house fell into disrepair and abandonment after the sudden death of Chen Shaozong and a family dispute over the distribution of the inheritance he left behind for his wife and sisters.

Local residents say that a young female dance fell in love with Chen Shaozong but the feelings were unrequited. In her despair, she dressed in a red and went to the main bedroom of the mansion and hung herself. Since then, stories have circulated about the sounds of a woman weeping coming from the house after sunset and a lights being turned on in the main bedroom of the mansion.

The Bei-Yi Highway is a curvy stretch of mountainous road connecting Taipei and Yilan County. The highway is prone to frequent accidents and is still one of the most regularly traversed roads for motorcycles. Fatal accidents continue to grow on Bei-Yi Highway despite improved road safety conditions.

Family members and loved ones of the deceased frequently travel to the highway to burn ghost money (joss paper). Burning ghost paper is one-way Taiwanese attempt to appease spirits and respect their deceased relatives. Unburned ghost paper can be seen along the Bei Yi Highway.

Located in the Xindian District of Taipei, the Bitan Amusement park was one of the most popular attractions during the 1980s. While the exact reason behind its closing remains unclear, the abandoned park remains a popular spot for tourists and locals to visit.

After closing, it is said that a worker died during the removal of the old Ferris wheel. Rumors began circulating that the abandoned amusement park is haunted by ghosts. Adventurers still enter the abandoned park, but there are now guards at most entrances.

Development of the UFO Pod City began in 1978. The houses were intended to be a high-end vacation resort for American military personnel stationed in east-Asia and wealthy travelers. The strange project was the brainchild of Finnish architect Matti Suuronen, whose experimental pods were designed to be portable, prefabricated houses. The housing project was abandoned in the 1980s due to hazardous coastal weather, structural design flaws, and a lack of investment.

The project’s fate was likely determined from the start when construction began with the removal of a large ceremonial dragon statue to make vehicle access easier. During construction, there were numerous fatalities and a series of mysterious suicides took place at the site. A nearby road also had a number of strange fatal accidents and at one point, ghost sightings scared the construction workers away from the site. 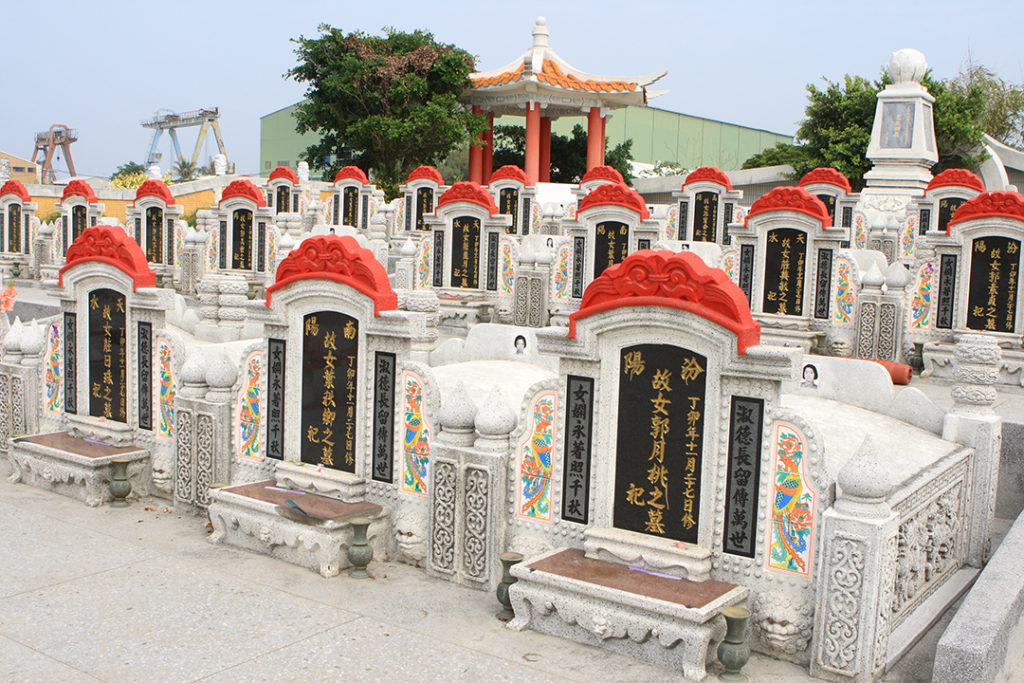 On an early morning in 1973, a ferry carrying workers to Cijin, a small island next to Kaohsiung harbor, sank due to overloading and mechanical failure. Twenty-five female workers onboard drowned, and a memorial park was created to honor their memory.

Years later, a taxi-driver passing the memorial park noticed a pretty young woman waiting for a cab in the middle of the night. The driver thought it was strange that someone would be waiting for a cab in such a desolate spot. After getting into the cab, the passenger explained that she was getting ready the next morning and wanted to get ready before her groom came to collect her. She instructed the cab driver to drop her off at a dark alley in Kaohsiung and told him to pick her up in an hour.

After paying her fare, the driver returned in an hour and picked up the young woman who had just had her hair done. He was taking her back along the same route to Cijin. The taxi driver started up small talk with the young woman, she explained that she came from a poor family and quit school to be a factory worker to support her family. As the taxi made its way through the tunnel to Cijin, the driver asked the passenger where she wanted to be dropped off. When she didn’t reply he turned around and saw nobody was there.